When my habeas corpus petition was before the federal Ninth Circuit Court of Appeals, the oral arguments hearing was held July 6, 2015. Just over 3 months later on October 25, 2016, the Ninth Circuit Court issued their ruling ordering an Evidentiary Hearing to be held. In the Ninth Circuit’s ruling they stated, “O’Brien’s state habeas petition alleged facts that, if accepted as true, showed that trial counsel failed to introduce available evidence that would have significantly strengthened O’Brien’s defense. Indeed, if believed, the additional evidence would have rendered it virtually impossible for O’Brien to have committed the murder with which he was charged.” and “Competent counsel would not have failed to put such evidence before the jury.”

Based on this ruling there was hope I may have my rightful freedom restored within months; that I would soon be home. Then the reality of our broken legal system sank in.

The Evidentiary Hearing was not held until January 17 and 18, 2017; over a year after the Ninth Circuit’s ruling. My case always seems to be plagued with one delay or another; continuously dragging out the fight for my freedom.

For example, at the conclusion of the Evidentiary Hearing, the Magistrate unexpectedly ordered my lawyers and the Attorney General’s office to provide additional briefs. My lawyers did not expect that and told me it’s almost unheard of to have additional briefs after an Evidentiary Hearing. Briefs had already been filed before the hearing. The evidence was produced at the hearing. The additional briefs took 9 months for the last one to be filed. There were several extensions requested on filing deadlines for the briefs, prolonging my wrongful incarceration.

On September 20, 2017, the last brief was filed. We are still waiting for the Magistrate’s ruling over one year later. It is now October 2018 and I am coming up on 16 years of being wrongfully incarcerated. It has been over 3 years since the Ninth Circuit’s ruling stating that the evidence makes it virtually impossible for me to be involved in the crime. I am innocent and we proved that with the evidence at the Evidentiary Hearing 21 months ago.

The waiting feels endless. No one knows when the waiting will end or when the Magistrate will issue her ruling. All that can be done is to wait and pray.

Thank you all for your support and prayers. 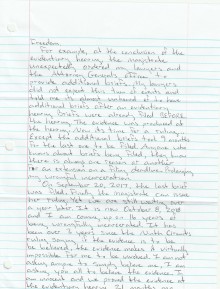 Sean O'Brien was wrongfully convicted in adult court in El Dorado County, California and sentenced to Life Without Parole at the age of 16 without a shred of physical evidence tying him to the crime for which he was convicted. Sean and I have been friends since grade school and we were married in 2017. We live and grow together in love with the knowledge of his innocence, our faith, and hope for our future. We embrace this journey, wherever it may take us, cherishing each moment we have together and staying true to our hearts. This blog is about the past we share, our life together and our fight for justice. Thank you for reading. God bless.
View all posts by Sean & Emelia →
This entry was posted in wrongful conviction and tagged 9th Circuit Court of Appeals, can you hear me?, court, help, not getting any younger, waiting. Bookmark the permalink.