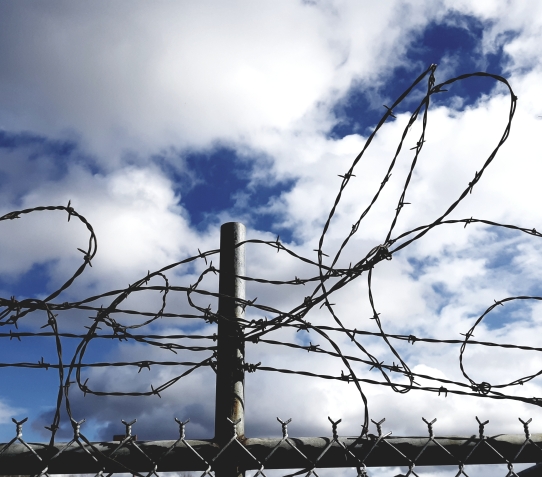 The following is the first in a series of posts Sean is writing about his experience at Duel Vocational Institution in 2006. Built in 1953, DVI is located in San Joaquin, CA. It serves as a reception center for all newly committed inmates to the California Department of Corrections from Northern CA county jails. According to Wikipedia DVI is at 132% capacity as of December 2012 and has a long-standing reputation for being violent and dangerous. Sean was housed there for a brief period shortly after his wrongful conviction.

I arrived at Tracy (Duel Vocational Institute) November 1, 2006. I was 20 years old and nearly as naive about prison as I had been 3 1/2 years before, when I had been arrested at age 16. I was scared for sure, but in this new altered reality where I had been found guilty of a crime I did not commit and sentenced merely days before to Life in Prison Without the Possibility of Parole, I was unable to process anything.

I knew that prison was a place I would not fit in. My plan was to ask for Protective Custody, otherwise known as Sensitive Needs Yard or SNY, at my first opportunity. This had been recommended to me by a customer of my mom’s auto shop who had been a Captain at Mule Creek State Prison. I wanted to avoid the violence and gangs of the “mainline”, or GP, that I knew could forever destroy me. Even if it meant living around men who had committed disgusting crimes, what another man had done was none of my business. Survival was my only concern in this foreign environment.

As the county jail van pulled up to the gates of the prison, I saw for the first time the high level of security taken to enter a prison. The officers had to exit the van and secure all their weapons. Then they had to verify their identity as well as mine. The entire van was searched, including underneath, before we were allowed in.

I was astonished with what the prison looked like; it was huge. There were many layers of fencing, each one topped with razor wire. And there were so many buildings, I could not tell what they were all for. I had never seen anything like it. Then I saw the jet airplane, an old fighter style jet. Why is there an airplane inside the prison? It made no sense to me. I had no idea what to expect because when you are incarcerated the officers tell you nothing. They wont tell you what is about to happen, how long it will take, where you are going, they literally control every aspect and keep you guessing and on your toes as a means of control.

The van drove past huge “wings” of cells branching off a central hallway. Each wing housed more people than the entire county jail I had just come from. I was quickly removed from the van and taken into what is called Receiving and Release, or R&R. In this area I was strip searched, given worn-out and mis-sized clothing, and put into a holding cell with roughly 40 older men. The men were hardened by previous prison experiences, affiliated with gangs I did not comprehend, and covered in tattoos announcing those affiliations.

I vaguely remember a row of Caucasian guys calling me over to stand with them. I know introductions were made, they asked me my name, where I was from, and my sentence. I remember they grew quiet after I told them “Life Without the Possibility of Parole”. Most of them were low level offenders and parole violators serving short sentences. The finality of my sentence at such a young age shocked them. I have found that having been given a sentence of LWOP at 16 years old shocks most hardened inmates and correctional officers I talk to about it. And in a weird abstract way my sentence has become a shield of protection.

I was in the holding cell for hours, waiting to be processed into the prison. More men were brought in. Periodically I was taken out to have my fingerprints taken, my picture taken, asked some basic questions. At one point we were all given sack lunches but I could not bring myself to eat, I had no appetite. Eventually guys started to be called out of the holding cell and slowly it emptied out. Finally it was my turn, I was taken to another room where I was given a bedroll: a rolled up blanket, two sheets, and a towel. I was put into a tiny 2 foot by 3 foot metal cage. I had never seen anything like it. I have since learned that putting men into such small cages is common practice within the California Department of Corrections.

I stood holding my bed roll inside the cage for about an hour. I watched other men being taken out of other cages and escorted in handcuffs through another door. They would go into a room I could not see into. They never came back so I knew it was part of the intake process. When it was my turn I was handcuffed and taken through the doorway. In the next room I was instructed to sit down in front of a desk. On the other side of the desk was a Sergeant. I remember thinking “I need to ask now before it is too late.” So I asked the Sergeant if he could put me into the SNY protective custody. He asked me what I was in prison for. I told him I had been accused of murder (wrongfully convicted). He simply stated that I would be fine in the General Population.

This man did not know anything about me or care about me. He knew how the ‘General Population’ would use and manipulate a young man newly sentenced to JLWOP. He had essentially thrown me to the wolves, so to speak, without any consideration to my safety or well-being. I felt my level of fear rising as I realized that my plan to seek the safety of the SNY yard was not working yet. I would have to keep trying.

**Photo for artistic purposes, not from prison**

Sean O'Brien was wrongfully convicted in adult court in El Dorado County, California and sentenced to Life Without Parole at the age of 16 without a shred of physical evidence tying him to the crime for which he was convicted. Sean and I have been friends since grade school and we were married in 2017. We live and grow together in love with the knowledge of his innocence, our faith, and hope for our future. We embrace this journey, wherever it may take us, cherishing each moment we have together and staying true to our hearts. This blog is about the past we share, our life together and our fight for justice. Thank you for reading. God bless.
View all posts by Sean & Emelia →
This entry was posted in life in prison, wrongful conviction and tagged Duel Vocational Institution, JLWOP, prison, teen inmates, wrongful conviction. Bookmark the permalink.

5 Responses to DVI 1: Welcome to Tracy