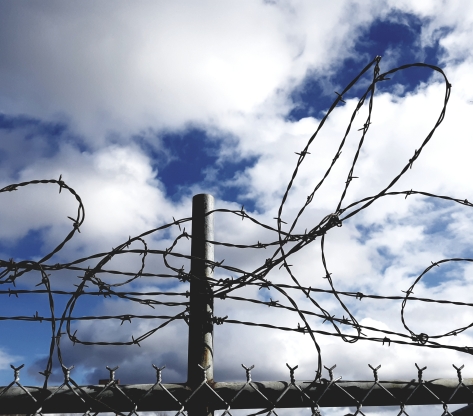 This is the second post about Sean has written about his experience at Tracy Reception Center (Duel Vocational Institution) in 2006. DVI has a long-standing reputation for being violent and dangerous. Read his first post: DVI 1:Welcome to Tracy

Eventually I reached my cell that first day in Tracy. It was already dark outside, that is all I knew of the time. I was exhausted; mentally and physically spent from the past few days. I was 20 years old, had just been denied my motion for a new trial and sentenced to Life Without the Possibility of Parole. I was given no time to process this before being woken up at 3:30 am and shipped to Tracy. In this dark world I did not know I was ready to fall asleep and wake up from the nightmare I had been living.

As the cell  door slammed closed behind me I found myself locked in with a man I did not know. He was a complete stranger I now had to live with. All I had with me was a bedroll and a ‘fish kit’; a small care package containing one roll of 1-ply toilet paper, one bar of state soap, a small packet of tooth powder, one disposable razor, one 2 inch toothbrush, a small plastic spoon, and two pre-stamped envelopes. Besides being given an additional roll of toilet paper, bar of soap, and a packed of tooth powder each week, plus a piece of my cellie’s deodorant,  this is all I would be given for my hygiene for the next 90 days. This is all the California Department of Corrections and Rehabilitation provides to indigent inmates and new arrivals.

I do not remember anything about my first cellmate other than he was Caucasian. I do not remember what he looked like, his name, what he was in prison for, or anything else. I know we introduced ourselves. At the time all I cared about was getting to sleep, I simply wanted the day to be over. Unfortunately I knew I could not admit this as it might be misinterpreted as weakness.

In the fog of my exhaustion and emotions I could not process, I remained awake to have a conversation with him. Mostly I just answered his questions. Occasionally he would yell things out the door to other guys, sometimes in response to their questions, other times to pass on information about me. I was too out of it to even think about this at the time. I later learned that he had been “vouching” for me on being “good”,  meaning I did not have any violent history or crime other Caucasian guys should be concerned about.

I remember all the noise that first night, a constant drone of men shouting. Just as my cellmate would shout out the door, many others would as well. Yelling out on the tier seemed to be normal behavior. There were many conversations going back and forth. I do not know how they kept them all straight. I heard all of this noise while my cellmate kept talking to me and asking me questions. I wondered if it would ever end.

During this time I used the supplies from my bedroll to make my bed which was an old ratty stained mattress pad with a big hole where stuffing was coming out. The mattress pad was barely two inches thick and when I got my bed set up and laid down it felt as if I was laying directly on the metal bunk. At the same time it felt good because I was finally off my feet. I closed my eyes, still hearing all the noise and my cellmate’s questions.

Then it began. The noise outside on the tier got louder, if that was even possible. All the various gangs with their members began to do what I later learned is refered to as a “role call”. Sometime during this role call I fell asleep, despite all the noise. I was out to the world.

I slept until I heard the crash of my neighbor’s door being slammed closed and my cell door being jerked open. In the confusion of being startled awake I could not grasp what was happening. It was still dark outside the cell. I was still in prison. The nightmare was not over. My body ached from the metal bunk and almost no mattress. I tried to assess the situation. I am not hurt. No one is attacking me. Why am I awake?  “Breakfast!” the guard shouted “If you don’t get down here to grab your tray it’s a refusal!” I didn’t even know if I was hungry. I just wanted to sleep, that’s all I could think about.

My cellmate ended up getting my tray for me followed by the door being slammed closed. I was handed my tray as I was still processing it all. I tried to make sense of where I was and the situation I was in. I realized the tier was fairly quiet this early, most of the noise was coming from the officer and the few inmates assisting him  passing out the breakfast trays. I remember looking at the food on my tray and wondering if they seriously intended for us to consume whatever it was. I ate what I could manage to and then offered the rest to my cellmate.

I climbed down from my bunk to get some water from the sink, I was incredibly thirsty. The sinks in prison work like a water fountain and I felt the cool water touch my lips, I drank and it was disgusting! I quickly spit it out. I asked my cellmate what was wrong with the water. He said it was actually better than a few months prior. I asked if he had been there that long and he said yes. My heart sunk, I had been told I would only be in Tracy for 30 to 60 days. This guy went on to tell me some of the inmates who were level 4 had been there for two years. I knew with a LWOP sentence I would be a level 4. My mind was trying to comprehend being in Tracy for that long. But first I had to deal with the water.

The water was awful, I managed just a few sips.  My cellmate told me I could make a cup out of the empty milk carton from breakfast, then use it to mix in the drink mix packet (like a sugar-free Kool-Aid) from our lunch trays. I drank my milk and waited. When our lunches came I sought out my drink mix packet. I filled my milk carton cup up with water and did my best to mix in the powder, it did not dissolve as I had expected. I later learned it was better and easier to leave the milk carton intact so I could close the opening and pinch it tight with my fingers while I shake the water and drink mix together. My cellmate offered me his drink mix packet, explaining that he had gotten used to the water. I did not know how this was possible but I gladly accepted his drink mix packet. I put it up on my self like a small treasure.

I knew two packets of drink mix per day would not get me by, they were only enough to make 8 ounces each. I would later dilute it to get about double that, just enough flavor to make the water bearable. I asked my cellmate how I could get more and he told me I could trade other guys. I had nothing to trade, but I could draw.

This became my first goal, trading drawings for drink mix packets. My cellmate had a few pieces of paper and a pen. I folded the paper into thirds, on one third I would draw. My artistic skills were still in their infancy at this point, but I managed some simple roses and hearts. My cellmate called one of the inmate porters to our cell door. We explained what we had and what we wanted: one card was for drink mix packets, one was for more paper, and one was for a couple ‘shots’ of coffee. In prison a spoonful of instant coffee is called a ‘shot’. The porter said he would do it for us but he wanted a drawing too, we told him if he got us what we wanted I would draw for him. He agreed and I took my first step in learning to survive in this foreign world.

*picture not from actual prison*

Sean O'Brien was wrongfully convicted in adult court in El Dorado County, California and sentenced to Life Without Parole at the age of 16 without a shred of physical evidence tying him to the crime for which he was convicted. Sean and I have been friends since grade school and we were married in 2017. We live and grow together in love with the knowledge of his innocence, our faith, and hope for our future. We embrace this journey, wherever it may take us, cherishing each moment we have together and staying true to our hearts. This blog is about the past we share, our life together and our fight for justice. Thank you for reading. God bless.
View all posts by Sean & Emelia →
This entry was posted in life in prison, wrongful conviction and tagged Duel Vocational Institution, life in prison, prison survival, water. Bookmark the permalink.

5 Responses to DVI 2: The Nightmare