Sean and I grew up in a very small rural town in Northern California. We were in the same grade at the same school. We were childhood friends, often sat together on the school bus and had many of the same classes together. We danced together at a junior high school dance and have many shared memories of growing up in the country. I always thought of him in a positive light, he was just a normal silly kid who participated in 4-H, Boy Scouts, school sports teams, and volunteered at our school.

In 2003, when I saw Sean’s case in the newspaper I was absolutely shocked. The child I knew Sean as was gentle, sweet, an animal lover and a total dork. I could not believe my friend could have been involved in a crime. At such a young age I had believed that the justice system always does the right thing. I fully trusted in our law enforcement and legal system, just as Sean had. We both grew up with the belief that bad guys go to jail and the innocent walked free, which is, unfortunately, not always the case.

Sean and I began writing each other letters in 2007, 4 years after he had been wrongfully convicted and sentenced to Life in Prison Without Parole as a juvenile in the adult court system. Over time with letter writing, I grew to know my friend again and the more I learned about his case, the more I understood that he was actually innocent. At first, I didn’t want to know a world in which this could ever happen to anyone. But the truth was right in front of me, and it changed everything for me forever. The U.S., which leads the world in incarceration of its citizens, has approximately 2 million people behind bars. That means a wrongful conviction rate of 1 percent would translate to 20,000 people punished for crimes they didn’t commit. That’s staggering.

What began as a mutually respectful friendship slowly bloomed into much deeper feelings. When we realized we had fallen in love, we proceeded with caution because of our situation. We didn’t know if a healthy relationship between the prison walls was even possible, but we gave it a chance. With prayer and God’s guidance we have been blessed with a rare and beautiful connection that allows us to have a deeply fulfilling relationship. There is never a day of doubt in my mind of God’s plan for our life and we both know definitively that we are meant to be together.

Despite the many years of suffering and pain Sean has been put through, he is not at all angry or bitter. He is a genuinely well adjusted, down-to-earth, optimistic guy. It is clear to everyone who knows him that he does not belong in prison. Sean is a good man who is incredibly patient, intelligent, and devotedly compassionate. He has helped me develop the ability the get through literally anything and to achieve true happiness despite the circumstances in our lives that we are unable to control. He strives to do his best while incarcerated; he has a full time job as Chairman of the Men’s Advisory Council, he is close to earning his Associate’s degree with a 4.0 GPA, as well as participating in peer mentoring & self improvement classes such as ‘Life and Beyond’ and “Inside Out Writer’s Group”.

Sean and I have been together as a couple since 2013 and we were happily married August 2017. Our love is truly special, it gets us through each day. We place great importance on our faith, our marriage, and simply living an authentic life. Since getting married, Family Visits (46 hour visits within the prison) have given us precious quality time together and we are truly grateful for every moment we have. 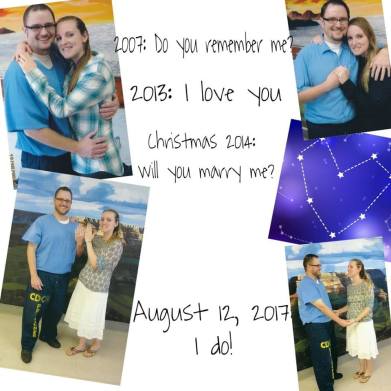 We feel driven to make positive changes within the prison system now and when Sean comes home. Besides spending time catching up on everything he has missed such as hiking, camping, BBQing, fishing, and doing normal things at home together; he would like to be an advocate for juvenile justice reform and to possibly work for the Anti-Recidivism Coalition or Initiate Justice. He has been accepted into Project Rebound as Sacramento State University and plans to obtain his BA once he is free. We are both passionate about bringing much needed reform to a broken system and advocating for juvenile justice reform.

“Then you will know the truth and the truth shall set you free.” John 8:3

“Unfortunately in wrongful conviction cases, there are literally no winners; everybody loses. Not only is someone incarcerated, at times for years upon years when they did nothing wrong, but the victims’ families have to relive the pain of losing their loved ones over and over again: at the trials, at the hearings, the appeals, the post-conviction hearings…it’s a long arduous process. And then, when a conviction is vacated, the families lose any type of conclusion in the case. They lose any sort of comfort they may have felt thinking that justice had at least been served. And that’s truly heartbreaking.” – Jillian, Court Junkie podcast

1 Response to Our Story